As a dry stone waller, I was amazed to discover some lovely Cotswold style dry stone walling in South Wales, in the heart of Margam Park, when working to restore the Margam Deer Park walls. Designed in 1948 by Ralph Hancock, the internationally renowned post war garden designer from Roath, in Cardiff, these gardens reflect the importance of dry stone walling in the history of post second world war British Garden design.

Inspirational landscape gardener Ralph Hancock was commissioned in 1948 to design a rose garden for the Twyn House in the grounds of Margam Park. Until relatively recently an outlying base for Neath Port Talbot College the house and gardens have been mothballed. They are now sadly falling into decay, badly in need of investment and restoration to their former glory.

The following extract from the internet:

It was at one of these post-war Chelsea shows (probably in 1948) that Sir David Evan Bevans (a Director of Barclays Bank) commissioned Ralph and Bramley to build the gardens at Twyn-yr-Hydd within Margam Park near Port Talbot, south Wales.

This delightful photograph of Miss Bella Clunn (left), who was Sir David’s housekeeper in the 1950’s, shows her in the walled rose garden. (Picture courtesy of Joyce Hunt).

The picturesque Twyn-yr-Hydd House and the gardens in which it stands are now the home of Neath Port Talbot College based in Margam Park. Through the tireless work of the Horticultural Department and lecturer Bob Priddle the gardens have been restored to their former glory.  The high walled garden contains many of the features for which Ralph has become known. Cotswold stone walls with wrought iron Clairvoyee and an attractive formal pond.

The planting too is typical Hancock in style. The following two images show the rose gardens as they are now (right) and as they were when Ralph and Bramley created them (left).

Since the original article on Twyn-yr-Hydd was written, Neath Port Talbot College are no longer based in the house. It is understood that maintenance costs and associated drainage problems to the house made staying-put impossible. Sadly, the house has been mothballed and the gardens have been allowed to become overgrown. The following images show the extent of the neglect to both the interior of the walled garden and surrounding landscaping including one of the two bridges and the rear of the walled garden. The once beautifully restored wrought iron gate, so painstakingly hand-painted by Bob Priddle and his team no longer looks as lovely.

The gardens at Twyn-yr-Hydd are likely to have been one of the last major projects, outside London, which Ralph designed and completed. End

I had an immediate urge when I saw this hidden gem to gather support and try and do something about the decaying state of both the garden and its lovely walls and gates and the house itself. There are typical signs of a rapid exit by the college – rubbish and random bits of unwanted furniture lying about – in other words the early stages of dereliction.

However I have discovered that some action is being undertaken – at least as regards the garden. The friends of Margam Park have been undertaking some restoration pre Covid 2019 as recorded online – https://www.fompnews.org/twyn-yr-hydd and here http://www.ralphhancock.com/home/twyn-yr-hydd-restoration I’d love to get involved!

There is vegetation that gives life and beauty and some which strikes at a waller’s heart, that will tear down even a well built wall over time, working with wind, rain and frost. This is the Vegetation Blacklist of Walls.

A lot of wallers see a clean wall, unsullied by plants of any kind, tightly fitting stones squeezing out all life, as a thing of beauty. However to me this is a dead wall and strikes against the philosophy of the ecologically friendly living wall.

The living wall encourages growth of ‘wall friendly’ plants, with nooks for insects to thrive, for animals to hide and birds to nest. Robins, gold crests, wrens even varieties of tit will nest in a well constructed living wall. Masonry and solitary bees should be welcome. Frogs, toads, newts and lizards love to hibernate in a wall.

In my book all should be welcome and the waller should allow shared space for them when constructing a wall. Wall friendly plants include:

A great asset when cover is needed – Babies Tears will grow in lovely green cushions between the cracks. A perennial, once established Babies Tears will run and run! Likes it damp and tolerates shade well. This is self propagating.

Sometimes confused with the hair bell is common in gardens all over Cardiff and South Wales. It is a pretty flower, self propagating and with a light root system. It likes some moisture but will tolerate dry periods, sometimes looking wilted but usually recovering with a rain or some water.

Some say chamomile is sweet smelling – some cloying. A pretty simple daisy-like flower on a succulent green foliage can be grown from seed or by splitting existing plants. Plant beside the wall as although very hardy once established it does need a soil base. Excellent for a Clawdd – sunny.

Creeping thyme is a small low growing perrenial which once established will provide a pretty pink flowered scented mat across the top of a wall, between copers. In my experience it needs a sunny position to establish and quite likes it hot. West Wales and coastal areas work well although we have them in our Cardiff Garden

Houseleeks sound Welsh somehow – An attractive succulent is very hardy and once established will produce a matt of rose shaped leaves. Sometimes known as hens and chicks the Hens may be up to a couple of inches across while the chicks are as little as half and inch

A fern-like plant propogated by spores common across South Wales, this makes a pretty, rather dainty addition to the cracks in a shady wall. Willtolerate dry conditions.

Various sedums grow well in walls being particularly tolerant of dry and hot. Perennial and attractive to bees some care should be taken when acquiring a particular type as they can be quite tall, up to a foot in height.

Thrifts also known as Sea Pinks are often seen by the sea with pretty clover-like flowers and delicate spiky leaves. Sold for rock gardens, there are lots of varieties.

Many types of mosses love a shady wall and can make a really beautiful addition. Mosses are perennial and will gradually cover a wall. Mosses enjoy damp but will also survive dry periods. Ask a friend or a friendly farmer if you can have a little piece of moss from a wall and then just push it into a shady spot.

Thanks for joining me! 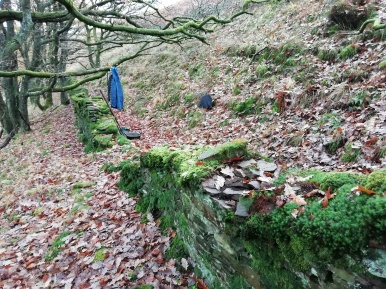 They stole some tools! Why? 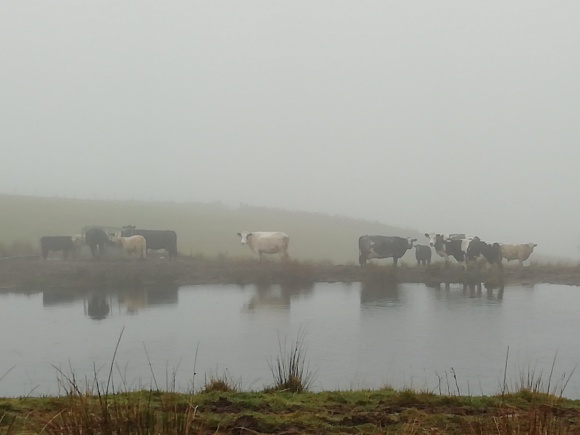 Fantastic opportunity for a long contract repairing a forest wall near Ogmore Vale – thanks to Ken for the introduction.  A hundred metres of repairs this year – cracking on.

The old wall is beautiful and the surrounding area on a cold and misty morning. 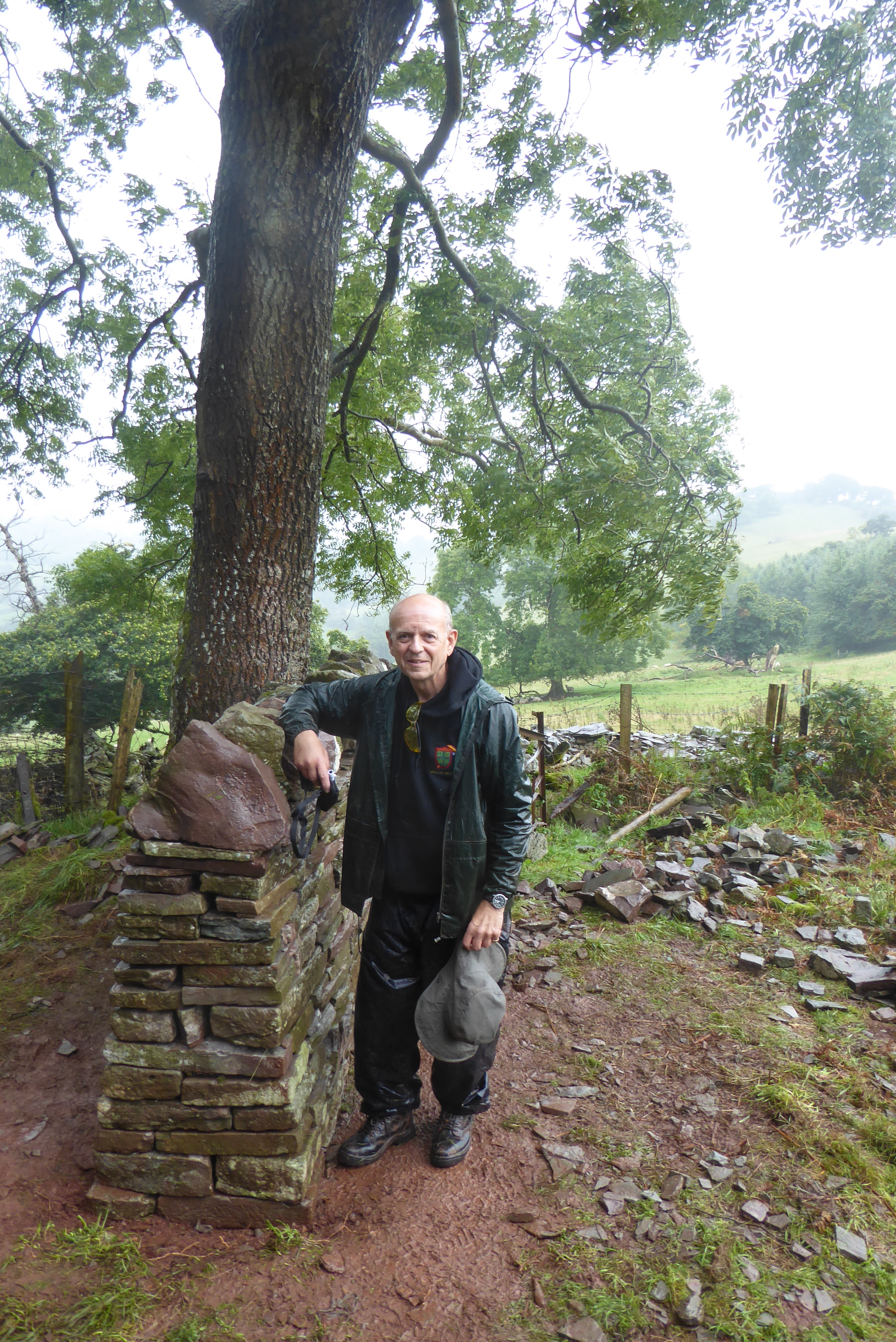 Whacked after seven hours in the pouring rain I was accredited at LANTRA L2 Intermediate and at Instructor level. That’s 2.5m x 1.2m dry stone wall with cheekend, stripped down and rebuilt in 7 hours – a total of 5 tons of stone shifted – on your own. Assessed by Andrew Loudon and Sally Hodgson from England, meeting the rigorous DSWA/LANTRA qualification run by DSWA Welsh Branch in Libanus near Brecon on 16.09.2018. 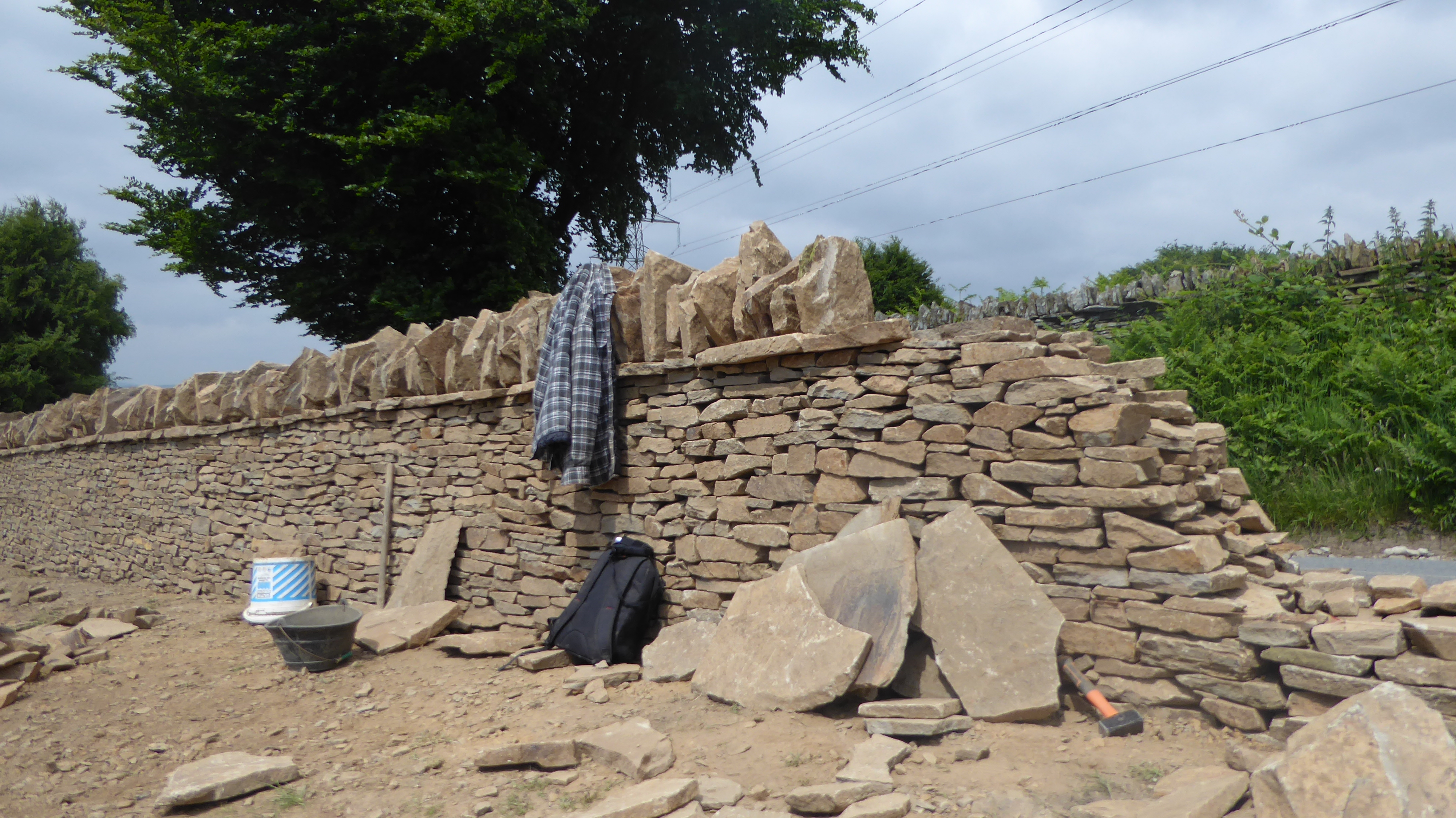